Once again, for the third time in a row I was delighted and honoured this year to be invited back by Lindisfarne’s Ray Laidlaw to perform again at the Sunday For Sammy concert – the 20th anniversary show.

The two shows were performed again at the huge Newcastle Arena, increasing our capacity to 6,500 people each show, with tickets selling out almost immediately. Brilliantly directed by Geoff Wonfor and put together by the awesome SFS team.

It was, as always, a massive buzz performing in front of a North-East crowd that big, especially for such a brilliant cause, and especially alongside the North-East performing royalty that appeared this year.

As well as doing what I love best – performing sketch comedy – it’s always a thrill in these shows when the whole cast assembles on stage at the end to accompany Billy Mitchell and Ray Laidlaw in the mammoth Lindisfarne hit ‘Run For Home’. This year we were also joining the legendary Jimmy Nail, who returned to the show after sixteen years away.

You’ll be able to buy the DVD of the whole show very soon (which I highly recommend!) – details of how and where are here on the Sunday For Sammy website. 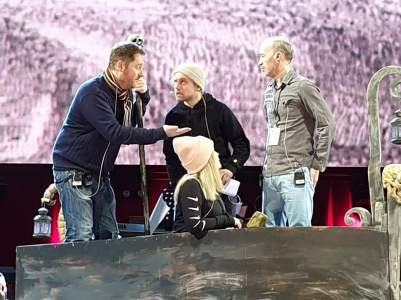 Me and James Baxter on the huge screen 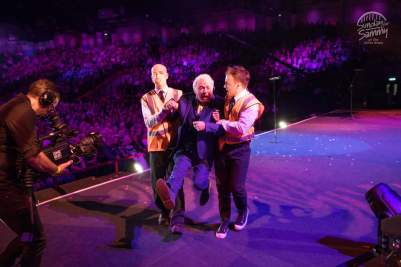 James Baxter and me backstage

Singing Run For Home in front of 6,500 people, with Jimmy Nail and the band

About Sunday For Sammy
Sunday for Sammy is a biennial entertainment extravaganza held in memory of the late actor Sammy Johnson.  First held in 2000, the shows feature a galaxy of stars from the word of TV, theatre and music. They sell out in minutes, raising funds for creative, talented and wnthusiastic young performing artists from the North East.
Sunday for Sammy… it’s THE Geordie Command Performance!