I was approached recently by Michael Ganley, lifelong Sunderland AFC fan and owner of the Sunderland Fans Museum, to write a piece and perform it at tonight’s official opening of his new space in the city’s library.

SAFC Fans Museum is a private collection that Michael has ammased over the years – at huge personal expense – and is an unrivalled collection of SAFC memorabilia.  He has everything, from old programmes right up to the actual boardroom table from the old Roker Park, Kevin Phillips’ Golden Boot, and even Ian Porterfield’s tracksuit from the 1973 FA Cup Final.  (All of which you will appreciate the true magnitude of if you’re a Sunderland fan!)

The launch was a huge success, with many city dignitaries and VIPs attending, along with ex-SAFC players from the 1973 Cup winning side.

The monologue I wrote and performed was geared towards taking a longer piece into local schools, and focussing on the educational side that Michael wants to set up in conjuction with his fans museum.  It proved a huge success, and I look forward to working on the project with him further in the future.

The Cranked Anvil team with Mayor and Michael Ganley 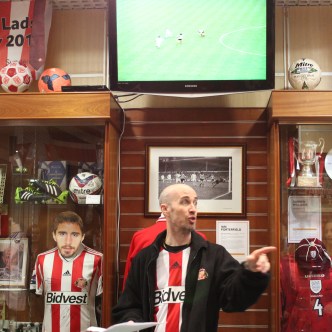